Xólotl: Dios Perro is the first monumental alebrije that has been displayed throughout the United States since 2013. Oscar Becerra-Mora is one Mexico’s great contemporary artists. He has dedicated more than 10 years to the art of cartonería: vibrantly painted papier-mâché sculptures incorporating modeled cardboard.

Xólotl: Dios Perro showcases Becerra-Mora’s mastery of cartonería, and is his take on a mythological creature from the Aztec culture. The god Xólotl (pronounced Sho-lotel) is the brother of Quetzalcóatl, and was charged with guarding the sun as it passed through the underworld. It is said that he helped Quetzalcóatl in the creation of humankind. One of his defining qualities is his ability to transform into other figures, animals or objects. Xólotl: Dios Perro is the artist’s expression of the myth and a fantastic tool to stimulate the imagination.

Xólotl: Dios Perro is the first monumental alebrije that has ever been on display in the United States. This exhibition, part of the 2013 Biennial of the Americas celebration, is an exceptional sculpture which represents a great addition to the iconography of the world.

Alebrijes are Mexico’s version of the fantastical figures that have long been part of the collective imagination of cultures around the world. These creations are represented in many cultures in diverse forms such as gargoyles in Gothic Cathedrals, dragons in Asian cultures, feathered serpents in Meso-America, and various creatures in Greek mythology and Persian and Egyptian religious traditions. In Mexico, with its rich biodiversity, folk art and craftsmanship, alebrijes have found a unique home and a distinct look. They are represented as colorful creatures with features such as wings, horns, tails, and rooster feet.

There are two fundamentally different ways of creating alebrijes. In the State of Oaxaca, in southern Mexico, they are normally carved from wood from the copal tree, which contains a large amount of resin and tends to deform into capricious and exuberant shapes that naturally lend themselves to this form of art. In Mexico City, these figures are created using papier-mâché techniques and are painted with a wide range of the most daring colors and designs imaginable. 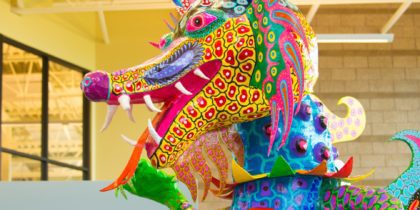 Our Alebrije is available for your cultural event! 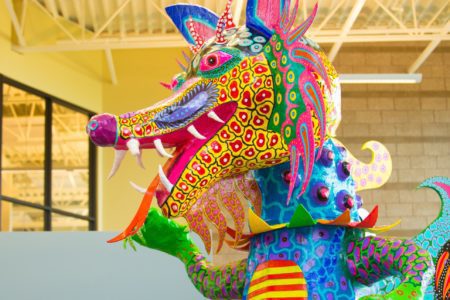 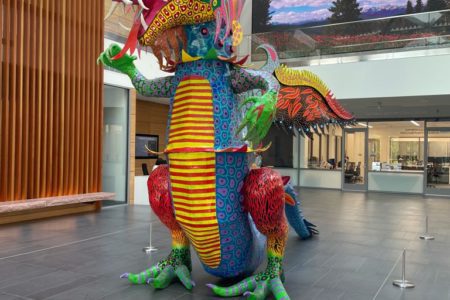 Made in Mexico City // Alebrijes Workshop 

‘Made in Mexico City’ is descending on Zeppelin Station for a colorful tour of the city’s cuisine, art, design and maker community giving Denverites an opportunity to experience our next…